The judges at DesignFirms have found www.synergydandc.com as one of the best on the Internet and hereby awarded Marstudio with the DesignFirms 2009-10 Web Award.

“A fresh, modern design for a Virginia-based design and construction firm” asserts DesignFirms website.  Synergy Design & Consulting’s website nabbed an impressive 91 points out of 99 to solidify its position among the best websites on the Internet. The judges awarded Synergy D&C’s website with 29 points for creativity and design, a maximum 33 points for programming and compatibility, and finally 29 points for ease of use and effectiveness.

We at Marstudio would like to thank DesignFirms for bestowing a great honor on our efforts and recognizing our hard work on this magnificent project. We also would like to thank Synergy D&C for their continued support and trust in our capabilities as a design and development firm and for giving us the free range we needed to produce such high-caliber work. Last but not least we would like to congratulate and thank our hard working team of designers and developers here at Marstudio who worked countless hours and slaved over insane amount of detail to make sure that Synergy D&C’s website is the best of its kind. 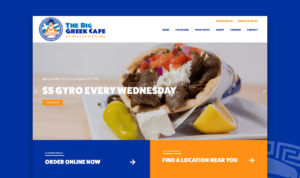