The classic paper milk carton was introduced in the 1950’s and 1960’s to address changing production needs. The use of disposable paper, as opposed to glass, was cheaper and the rectangular shape allowed for easier transport. Now, 60 years later, that same plain, boxy cardboard carton lines the aisles of our grocery store. Lately in our ever-continuing research, we have noticed a recent trend of creative milk packaging. Many designers around the world have reimagined and revamped the product’s container. Because we find this stuff endlessly fascinating, we’ve compiled 10 interesting and imaginative designs to challenge your idea of the typical milk package. 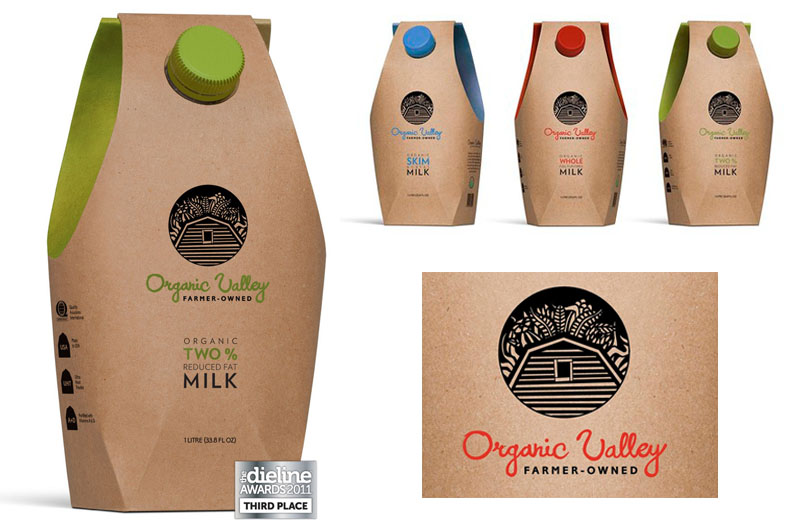 This student project was part of a 42-hour rebranding competition. The carton is made of 100% Tetra Pak, a material that is made of recycled materials and is recyclable itself. The color and material creates an earthy, organic impression. Soy-based inks were used for the logo, labels, and colored sides.

Audrée Lapierre specializes in data visualization and infographics. She took the nutritional information, traditionally found in a plain white label, and created a fresh graphic representation of the same facts. This informative visual is what creates the brand itself. Lapierre cleverly uses the nutritional facts to define the carton and distinguish the brand. 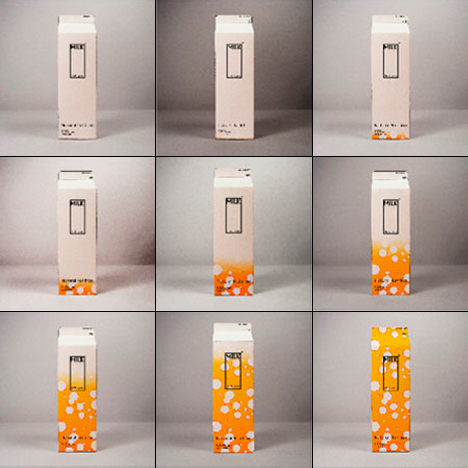 This is a project of Ko Yang’s titled Expiry Date/ The Things Far Away Beyond Numbers. The carton changes color over time, warning the consumer of the approaching expiration date. Although this design may help remind consumers that their milk is going bad, the visual of holy cheese creeping its way up the carton is not very appealing. The other flaw we noticed is that if the milk is still good, all we see is a plain white carton. Still—what an innovative idea! 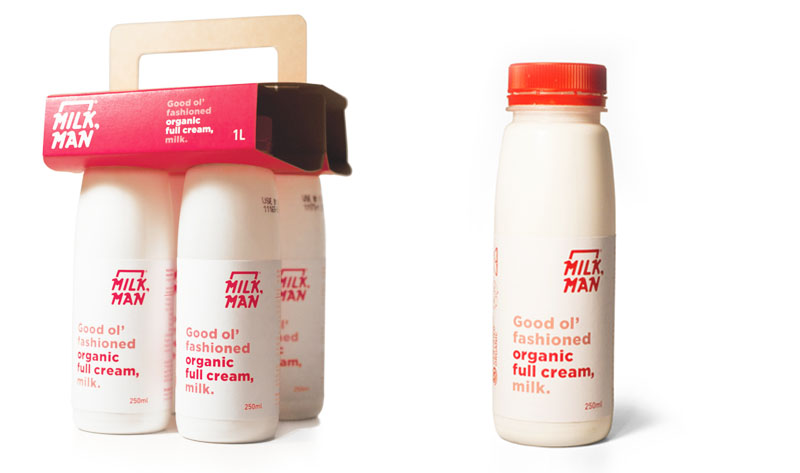 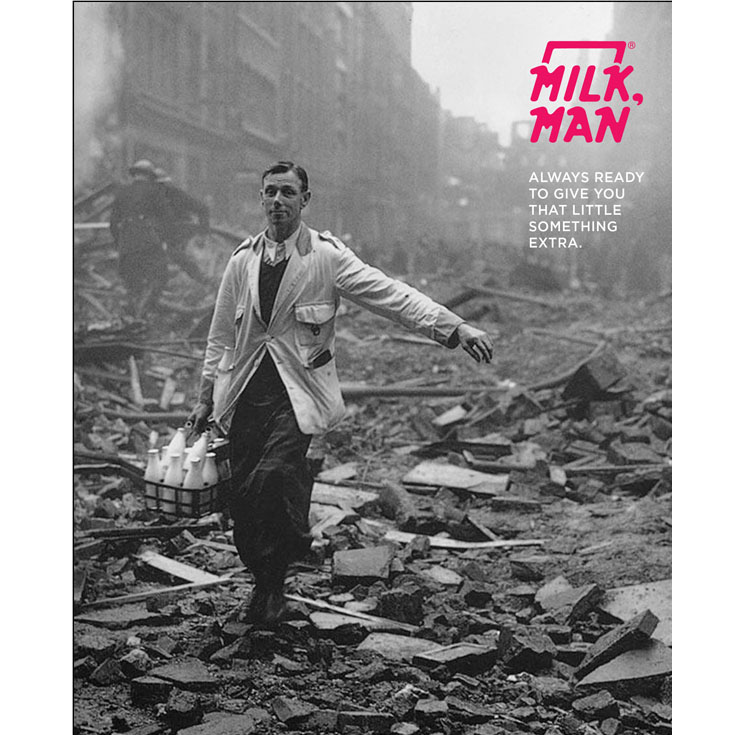 The Milk, Man brand targets the modern consumer who is always on-the-go by offering small sized plastic bottles of milk. This retro, old-fashioned vibe coupled with bold coloring and sassy copy is an entertaining twist. Plus we love the print ad. 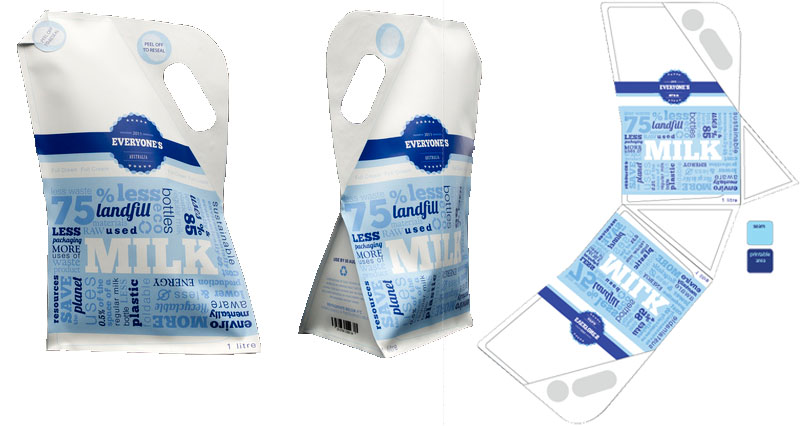 This interesting packaging concept was influenced by a prompt to create a futuristic milk package for the modern consumer. The unique shape is eco-friendly and more portable than a carton of milk (similar to Canadian “bags” of milk). The design also features a “peel off to reseal sticker” to keep milk even fresher, which you can see on the left.

Esra Oguz’s package redesign for Kido milk uses kid-friendly illustrations and shapes. The milk boxes look like characters and are sure to stand out on the shelves and attract a youngster’s eye. 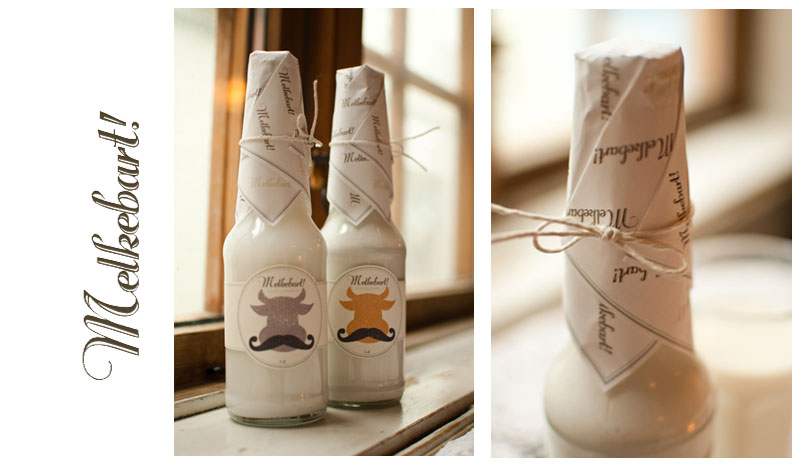 The story behind the design of Melkebart! (which means milk mustache) is an amusing one. The assignment was to design a milk product for students in Norway. The brand “features famous illustrations of animated cows which I have decided have grown up, gone to university, and grown mustaches”, says designer Kine Marie Kapaasen Madsen. The beer-like bottles and paper-wrapped necks add rustic charm to the design. 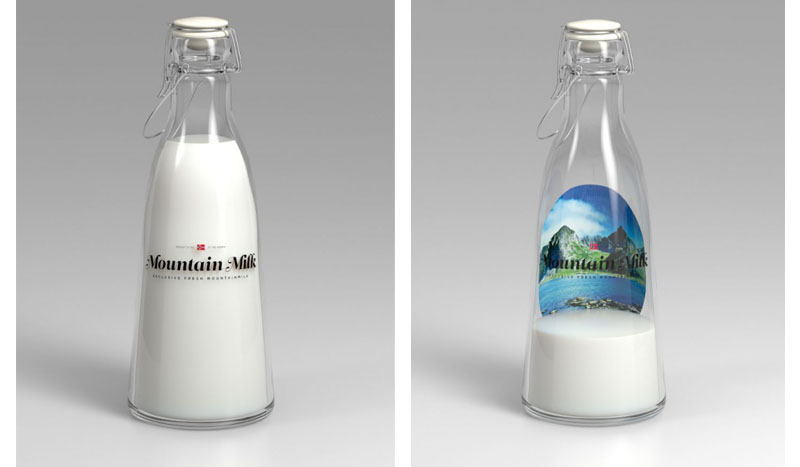 The stylish, minimalistic design of Mountain Milk, artisan Norwegian milk, creates an impression of quality. The sleek glass bottle is pleasing to the eye and stands out among all the cardboard cartons. The appearance of an image after the milk has been consumed is a fun idea; however the execution is poor as it clutters the overall visual, making it much less simple. 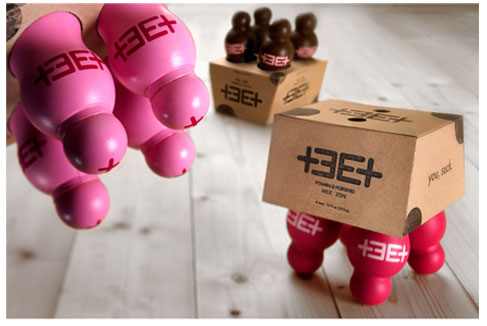 TEET Milk, a student project by Ashley Linnenbank, takes a straight-from-the-source approach to design. Each small bottle is unique in shape and color, and when grouped together, the complete unit looks like a cow’s udder. In this case, the whole is most definitely greater than the sum of its parts.

Most of the containers are student or company projects that will remain in the mock-up phase, which is too bad because we would love to see these designs pop up in the milk aisle some day!