Once again, the pent-up excitement for The Hunger Games has been collectively released with the arrival of the second installment of the trilogy. Catching Fire grossed $161.1 million domestically during its opening weekend (earning the position of largest domestic opening in November) and $146.6 million internationally. In honor of the recent release and noteworthy revenue, we are delving into the brand that is The Hunger Games.

According to producer Nina Jacobson, the international success of Catching Fire is a result of Lionsgate’s marketing and publicity strategy. We believe those efforts are also at least partly responsible for the movie’s domestic success.

The monetization of The Hunger Games is unique, and merchandising opportunities have been plentiful for the franchise. Recently, licensing deals and promotional efforts have taken center stage. These deals run the gamut, ranging from high-end chocolate boxes to colorful Capitol-esque makeup collections.

The fictional Capitol makes a seamless bridge to fashion merchandising, and the movie has taken advantage of this fact. CoverGirl has created a Hunger Games makeup collection, China Glaze released a Capital Colours line of nail polish, and Net-A-Porter, a clothing e-commerce site, just launched an exclusive capsule collection by the name of Capitol Couture by Trish Summerville. 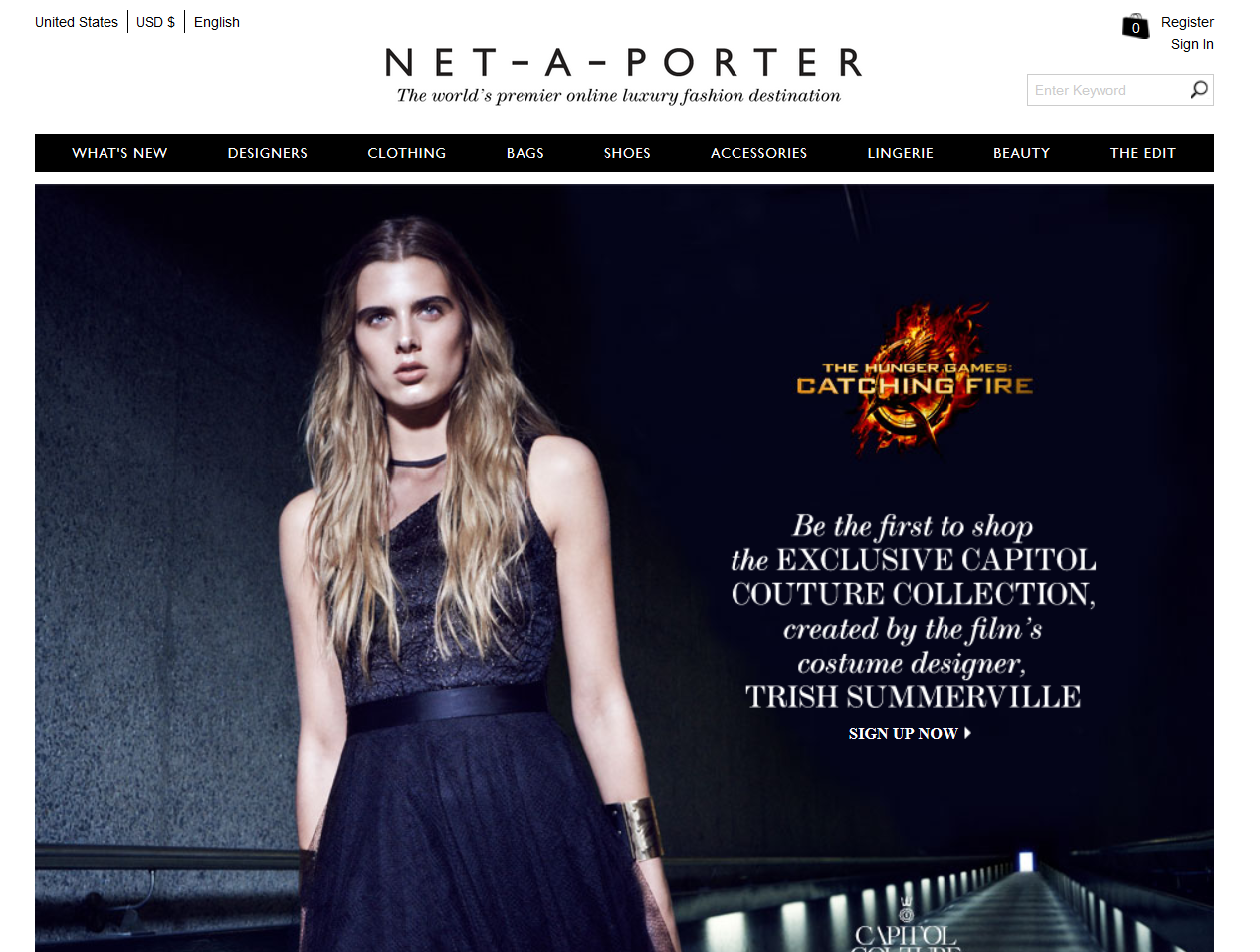 This kind of product promotion is relatively safe from criticism because it caters to our love of consumerism and seems to enhance the fictional world of Panem, The Hunger Games’ fictional society. Marketing in the “real world” is where it gets tricky. Inequality, social stratification, starvation, and violence as entertainment are major themes of The Hunger Games movies. The content has been summarized as “kids killing kids” —which is a three word synopsis of the series earned because the main plot entails teenagers fighting to the death to earn their district food for its residents and higher societal status.

Marketing execs: be warned. In order to market a movie that involves such troublesome, complex subject matter, promotions must be tactful and tasteful. Some argue that The Hunger Games has missed the mark.

Subway’s Chance to Win a Victory Tour stamps their website with the slogan “Where Victors Eat”. But, the ‘Victor’ characters are children in the films that have had the unfortunate experience of killing 23 other kids in order to save their own life. The new Panem Run app is a game that entices players with the phrase “Journey into the World of Panem”, and there is talk of a Hunger Games theme-park. But, Panem is a world of horror and exemplifies the lowest quality of life. Why would anyone want to enter that world via a game or a theme-park?

It has been pointed out that, ironically, promotions for The Hunger Games bring to life the dystopia that the movies condemn. These kinds of promotions fail to recognize the reality of inequality, social stratification, starvation, and violence in our own world. The movie has created a perfect platform to bring awareness about these real-world problems, yet the franchise has done very little to activate their powerful position.

The franchise has participated in few charities (and the amount of money devoted to them is miniscule compared to money devoted to other deals). Most recently, the Hunger Games movie has joined forces with the World Food Programme and Feeding America to educate our population about worldwide hunger and persuade individuals to donate money to this worthy cause. 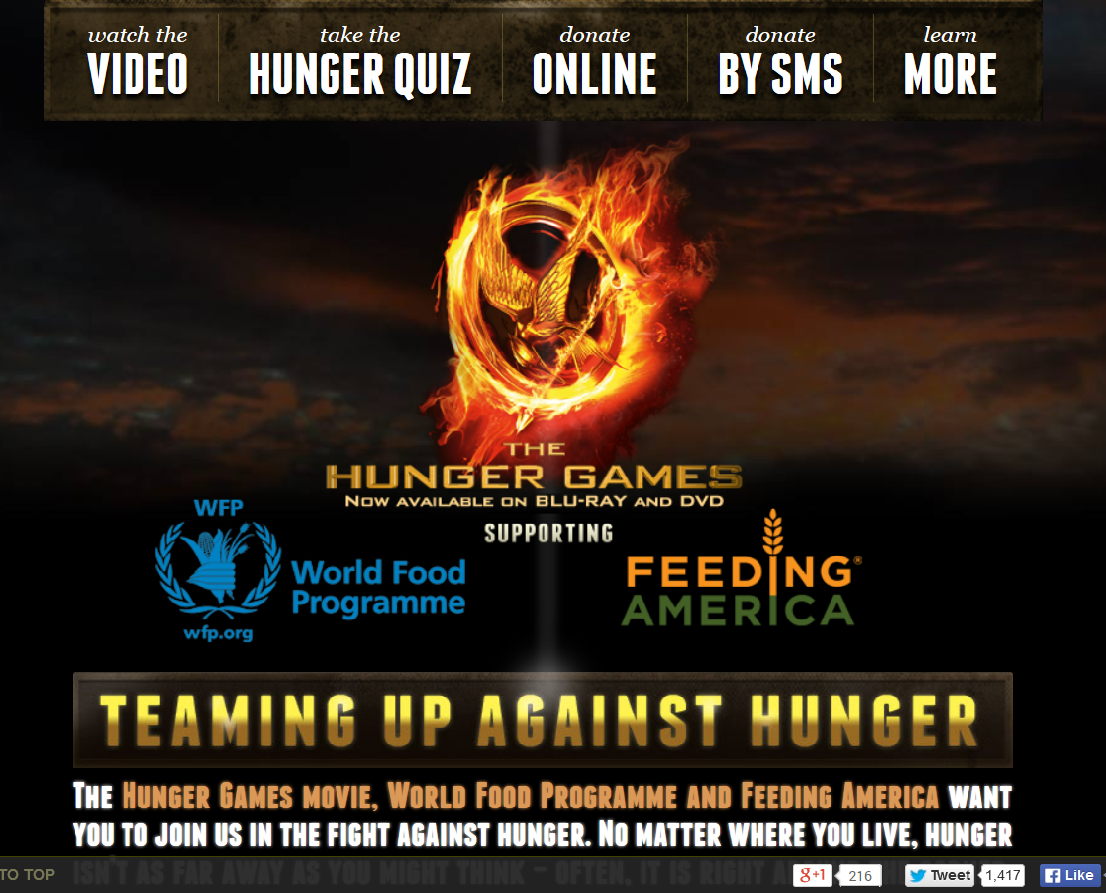 Other organizations have recognized the failure of The Hunger Games to take a stand and support the issues represented in the movie. The Harry Potter Alliance is not affiliated with The Hunger Games, but the organization is tapping into the movie’s fan base to address economic inequality. The not-for-profit started a project called Odds in Our Favor, with the goal to start a “resistance” and combat economic inequality. 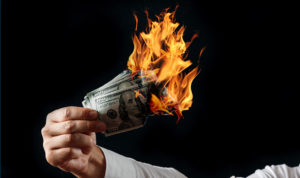