Recently I took a trip to London and I was exposed to a number of very simple and clever advertisements for Volks Wagon created by DDB. The ads were so clever that I became obsessed with finding every iteration of them. The ads are placed mainly in the London Underground system. Here is one that caught my eye as soon as I stepped into the Piccadilly Line:

The design is extremely simple yet it is amazingly captivating. It takes a very mundane and pedestrian everyday concept of redlining that most everyone is familiar with and uses it to amplify the message. The fact of the matter is that every individual that is exposed to this ad is compelled to read the lines that are crossed out just out of curiosity and that is the genius behind the concept.

This ad is part of a series of advertisements of course. The other ones also use the same everyday and familiar visual language of highlighting elements of the message. The final result is unforgettable and extremely viral in nature. You are bound to point it out to your friend sitting or standing next to you and in turn they are going to do the same if they are with another person. Once again a simple concept executed to perfection reigns supreme in the crowded advertising jungle and our hats off to the creative individuals at DDB. 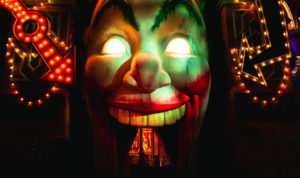