The recent re-brand of one of the world’s largest online marketplaces definitely caught our attention this week. Released in October, Ebay’s new logo has created some buzz in the design world—but not in a positive way. The company was attempting to create a fresh, contemporary, more streamlined version of their former logo (below: top), which was created over 17 years ago. But the feedback they’ve gotten has been a mixed bag and the new logo (below: bottom) has been called boring, plain, uncreative, and just lame. People have also accused Ebay’s brand refresh of looking too much like Google’s design. The goal was to make this new branding reflect Ebay’s ability to keep up with retail giants like Amazon and Overstock, and to do that by making it more “modern”. 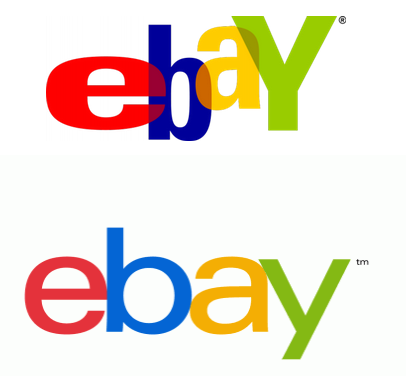 The new logo doesn’t appear much different than the old logo. But the typeface is much cleaner, the letters no longer overlap and they’re all lined up on the same plane instead of being staggered. Honestly, the new design is much better and it does a better job of asserting itself as a reputable, established, trustworthy brand. Our beef with the re-brand isn’t that it’s simple. Simple is great, and in most cases a straightforward logo can actually make a company look more established and more professional. And re-branding can be tricky because the new logo shouldn’t stray too far from the old or it runs the risk of looking like a totally different business. It’s important to make sure the audience can recognize that it’s the same brand that’s just had a makeover. In this particular case, Ebay got a makeover but instead of its curves being accentuated and its best features highlighted, it just got a few new sweater sets, braces, and a haircut.

With nearly 105 million people around the world using the site daily, Ebay has an obligation to be on the cutting edge of online shopping and it has to look the part. Brands should evolve as the business does, and with such a huge following, Ebay has the ability to truly stand out as a brand and as a superpower. We’ll admit, the eBay website has gotten significantly better. It has more white space, clearer navigation, better structure, and more features for savvy online shoppers. But the new logo has fallen short and doesn’t push the new site’s direction as far as they had hoped. There are agressive plans in place to grow the company and make the website even more convenient and efficient, and the feel of their brand will have a huge impact on this goal. To introduce their shiny new brand, Ebay created a microsite for the sole purpose of explaining this new direction. It’s a pretty cool site: ebay.com/new.

We may be a tad underwhelmed with the new brand, but could we have done better? One of the coolest things that has come from eBay’s logo controversy is that 99Designs.com, one of the largest communities for crowdsourcing design projects, decided to challenge its community to taking a stab at “Ebay’s lame new logo”. They received over 1200 entries from designers who thought they could top the recent redesign. The results were very interesting. Some were absolutely terrible and others were really cool concepts that actually could have easily rivaled the real logo. See the entries here.

The winning design (above) that got the most votes was an interesting one, and is definitely better than the one Ebay ultimately picked. We had a ton of favorites from the entries on 99Designs.com and we’re bummed that we won’t get to see any of them in action. Hopefully it won’t be another 17 years until Ebay re-brands yet again and picks a logo that has a bit more “umph”.